What Are the Sentencing Ranges for a First Time Felony Offender in Arizona?

Arizona crimes are divided into two categories: misdemeanors and felonies. Misdemeanors are usually handled by cities, towns, and justice courts and have less serious penalties. Felonies are usually handled by the relevant county superior court and have more serious penalties. Besides serving time in prison, a felony conviction effectively deprives a person of his or her right to vote for a period of time and his or her Second Amendment gun rights permanently.

The State of Arizona further breaks down felony charges into six different classes, with Class 1 being the most severe. The class of felony depends on what crime has been committed under Title 13 of the Arizona Revised Statutes and the prior record of the individual. The sentencing ranges for a first time felony offender in Arizona are discussed below.

Get in touch with Gary L. Rohlwing Law Offices today and take advantage of our free initial consultation. 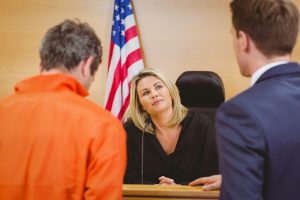 A judge will sentence a first time offender who is convicted of a Class 2 through 6 felony to a mitigated, minimum, presumptive, maximum or aggravated term of imprisonment according to A.R.S. § 13-702(D). What type of sentence a person receives is heavily dependent on the facts of the case, mitigating factors presented by the defense attorney, and aggravating factors presented by the prosecutor at sentencing. Any sentence in excess of 1 year incarceration is usually served in an Arizona prison. Besides prison time, a judge may also impose fines and restitution if there are any victims.

What Class is an Aggravated DUI

Aggravated DUI is a Class 6 felony if a person had a passenger under age 15 in the car. If you do not have a prior DUI conviction, the jail time could be anywhere from 10 days to 6 months.

Aggravated DUI is a Class 4 felony when it is a person’s third DUI within 7 years, the person committed DUI when his or her license is suspended for any reason, or the person committed DUI when he or she is supposed to have an ignition interlock device. The mandatory minimum prison time for a Class 4 felony aggravated DUI is four months with no work release.

If you are facing felony charges, you need to research the attorneys in your community today. Find a law firm that has experience defending your type of felony and arrange for an initial consultation.

You do not want to risk your future if you have been charged with a felony in Arizona. Make sure you get a reputable attorney to help you obtain the best outcome which might include reducing the felony class of the charges. Don’t hesitate!